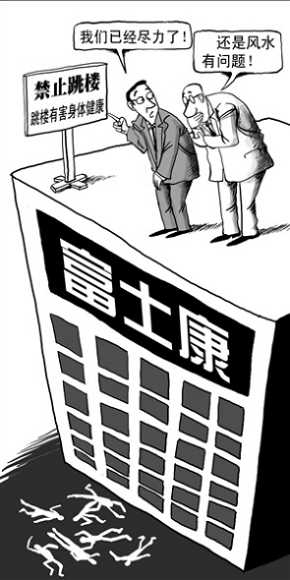 Thespate of suicidesat Foxconn have drawn global attention. The problem is, they do not seem to be abating, as a 21-year-old employee jumped to his death Foxconn’s largest manufacturing center in Shenzhen on Friday.

That is the 10th suicide bid among Foxconn workers this year and the eighth successful one. Foxconn manufactures many Apple products, including the iPad and iPhone.

The Shenzhen plant is the size of a city, with a employee base of 300,000. As such, its suicide rate is not unusually high compared to Chinaâs estimated overall suicide rate of about 15 per 100,000 people per year. However, Foxconn said that in 2009 it had fewer than than three suicides among its Shenzhen workforce.

It’s no laughing matter, and Chinese cartoonists have chosen to show their disapproval of the company with satirical cartoons. The example above, from MICGadget, is translated as follows:

This comic shows the high building of Foxconn with a signboard put on top saying “Suicide is Forbidden, Suicide is harmful to health”. And the man (representing Foxconn) pointing at the signboard says “We have tried our best”, and the man with white costume says “I think is a problem of feng shui “. So, Foxconn needs to be oriented.

Amusingly, aGizmodo commentergoes the Chinese cartoonist one better, by altering the cartoon as above.

You can see more satirical cartoons produced by Chinese media in response to the Foxconn tragedies at the MIC Gadget site as linked above. Each will have a corresponding translation.