StoryTlr, a project that enables you to create a simple event-based timeline of your photos, videos and tweets, has received several significant updates in the past few days, and suddenly – although the authors themselves insist that it’s a hobby project and not a “real” startup – it feels like a full featured service with some very interesting usage possibilities.

StoryTlr is a slightly different take on the lifestream concept. Let’s say, for example, that you went on a vacation this past weekend. While you were there, you took some photos and videos, tweeted some tweets, sent some mails, changed your Facebook status a couple of times, and so forth. StoryTlr lets you take all this stuff and create a story in the form of a slideshow, which is a wonderfully nice way to see what happened in chronological order. Even better, after this past update, you can embed your story anywhere, for example your blog. You can see an example of one such story here. 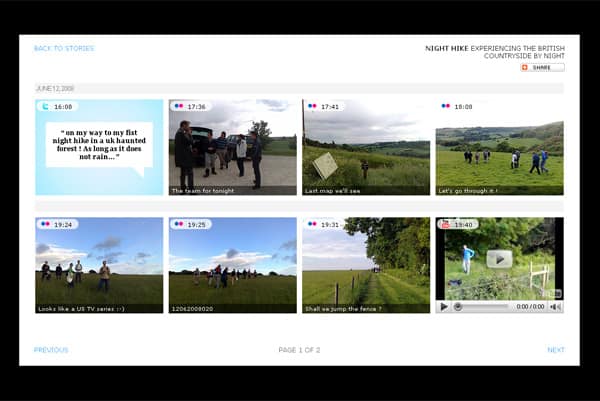 I think that this concept will appeal to many users who are sick of being able to update dozens of services telling everyone what they’re up to at any given time, but when they try to revisit their memories a couple weeks later, they simply can’t find them. StoryTlr is event-based; when something important happens to you, you can create an event and it’s listed on your StoryTlr page under the “stories” tab, which makes it easy to find (presuming, of course, that you’ll go easy on the stories and not create thousands of them). 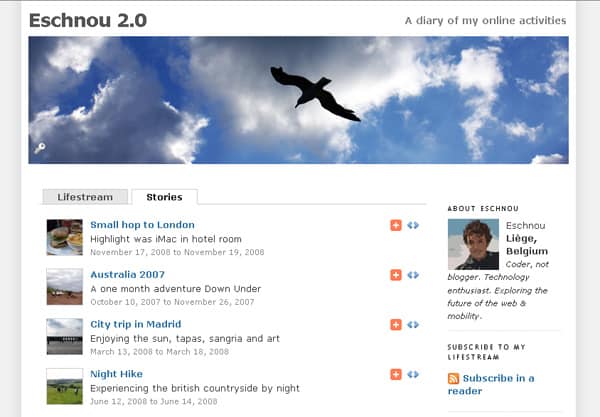 StoryTlr also functions as a standard lifestreaming application. Under the “lifestream” tab on your StoryTlr page you can find a diary of your daily activities; if this is what you’re looking for, you can find it on many similar services like FriendFeed or Profilactic. StoryTlr’s strength, however, is in its event-oriented approach and the lifestreaming part is just sugar on top.

Other new features at StoryTlr are theme customization, which includes changing a theme’s colors or even the entire CSS; Facebook, StumbleUpon, Vimeo and Tumblr support, as well as full data import, which means that StoryTlr will try to fetch all the data from a particular service, like Twitter, if possible. Put it all together, and you’ve got a serious competitor to Tumblr and other lifestreaming applications; the simplicity of the idea behind it will probably win over many users who just want a quick, smart and easy way to share their stuff online.