Can’t get an iPad 3G? Ensure yourself an unlimited data plan, anyway 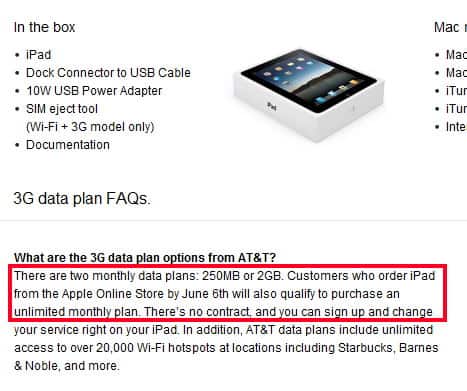 In the wake of the recent AT&T announcement that there would no longer be unlimited data plans on its network, including the iPad 3G. That’s brought up some questions, as it’s not that easy to get an iPad 3G. How would a customer ensure that they get a truly unlimited data plan, if they want one?

The answer appears to be: order from Apple, online. There’s pretty clear language on the Apple website that would seem to point to that as your solution.

As of the time of this writing, the following blurb appears on Apple’s store, in the FAQ on the data plan:

Customers who order iPad from the Apple Online Store by June 6th will also qualify to purchase an unlimited monthly plan.

Meanwhile, however, it appears that AT&T is alittle confused on the issue, or at least disagrees with Apple. AT&T said “We are looking into this situation and how we can accommodate these customers.”

While customers using smaller devices such as an iPhone or Nexus One probably won’t see an issue with these new limits, there is a reasonable amount of concern that users of the iPad, with its larger screen and different “use case,” might not be so lucky.

So here is the answer to the question of ensuring you can get the unlimited data plan, if you want it: Order from Apple, and make sure you take a screenshot of the Apple page (as above). Take a shot of as much of the page as you can, and be prepared to argue with CS reps, as well.

Update: AT&T; has agreed that it will honor the terms Apple stipulates on their site.