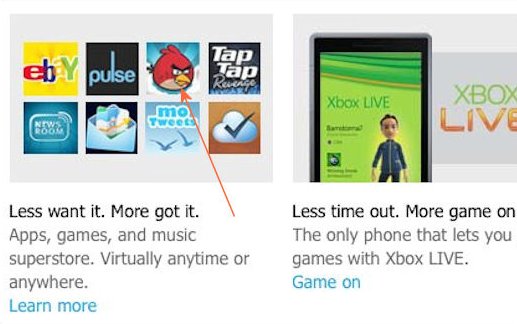 The developer of Angry Birds, Rovio, was itself angered, when it was discovered that the Angry Birds icon was on Microsoft’s Windows Phone website, teasing folks into thinking that Rovio had committed to Windows Phone 7 support. Thing is, they haven’t, and they weren’t happy at their IP being used without their permission.

The company Tweeted (in a series of tweets):

We could do a WP7 version of Angry Birds, not the issue. We have not agreed to do that (yet). Will support all relevant platforms.

@sarat not turning our face, just setting the record straight. It’s a matter of principle.

@Ralven2000 time will tell, only thing we said that we have not committed to do WP7 yet, we don’t like others using our IP without asking

“It appears information was mistakenly posted to Microsoft’s website, and has been removed. We have nothing new to share, but stay tuned for announcements from Microsoft and its partners on Monday.”

An earlier leak of aU.K. carrier’s roadmapsaid that Windows Marketplace would open with over 2,000 apps available. While 2,000 pales in comparison to the number of apps in the App Store and Android Market, if they are useful, relevant apps (meaning, not 2,000 fart apps) that might be sufficient for a launch.  It just won’t include Angry Birds.